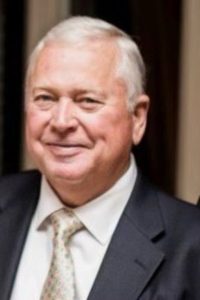 Hank holds the dubious distinction of having served on the board of City of Faith the longest.  He began his service in the very beginning of the program, 1984.

A lifelong resident of Ouachita Parish, Hank began his career at Ouachita Coca-Cola Bottling Company as a teenager by driving a Coke route. Working his way through the ranks, he eventually retired as Director of the bottling company.

In addition to serving on the City of Faith board, Hank has held positions on numerous other boards including, but not limited to, the Emy-Lou Biedenharn Foundation, Delta Airlines and Coca-Cola.

Since his retirement, Hank has enjoyed hunting, fishing and managing a 600 acre farm. He and his wife of 46 years, our very own Kathy, have three adult children, Keith, Becki and Aron and seven grandchildren. He and Kathy have recently relocated to a smaller homestead in Monroe enjoying a beautiful view of Bayou Desiard.